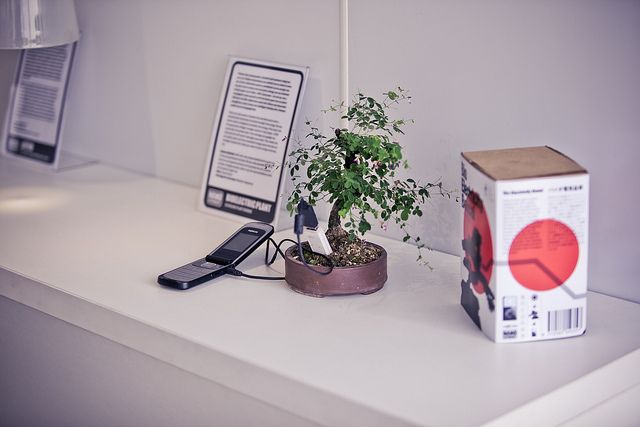 Yesterday was the third and final day of PICNIC. The picture (courtesy of PICNIC) was taken in the NANO supermarket and is a bonzai tree powering a cellphone. In this supermarket artists gave impression what could be done with nano technology. This wonderfull day started with the Open Data Breakfast. First Yuuso Koponen of the Aalto University in Finland kicked off with a very good presentation on information design & visualisation. One great insight was that visualisations enables the reader to choose the sequence of the information whereas in text the writer forces the sequence. Infographics are more pull than push so to say. Another important lesson to be learned was the speed in which your brain gathers data. Sights is the fastest with 10 Mbit/s while hearing is only 10000 bit/s. This explanes why visualisation can enable faster comprehension because it simply get’s in your brain faster. A third take-away I want to stress, is that visualisations should reduce data and to set the data side by side to enable easy comparison.

The second part of Open Data Breakfast was a workshop by Nokia on ideasproject.com. This site offers people the opportunity to submit ideas for using open government data. We worked on some very nice ideas. One of the ideas was the parking space problem. During the discussion the open311.org project and the Code for America project got mentioned. Both use open source to help municipalities open up their data and services to the public. During this discussion I wondered if citizens really want to be engaged in the government, business and people triangle. My idea is that as citizens we appointed government to take care of public service on behave of us. Why would we get engaged again?

After lunch  I really enjoyed the discussion on storytelling which was hosted by Dr. Beth Coleman. First was the director of Wasteland, a story about people living on a wastesite in Brasil. Second was Jeff Hull, the creator of the Games of Nonchalance for the Jejune Institute in San Francisco. Third was Euro Beinat, professor of context awareness in Salzburg, who talked about the currentcity project. Last but not least was Howard Goldkrand, creator of the Alternate Reality Game (ARG) Dexter. All showed remarkable ways to tell stories that change lives of the people in the story. Where a film the audience is not a part of the story but in the Games of Nonchalance and the Dexter ARG the audience participates. The Dexter APG had three tiers of participation from just viewing to full blown participation. These stories are told in a number of media at the same time because people all have different preferences to enjoy. It even got that far that in the game a game emerged between the makers and hackers who tried to hack the game. They were discovered and in a playfull way were engaged on their turf.

During the break I witnessed the Appsterdam reward ceremony where an app won that enabled, again, to find free parking spaces. This seems to be a big issue in cities of all kinds and especially in Amsterdam.

The last session was about the business case for cities.  The session started out really great with Isis Spuijbroek, creative strategist for the City of Rotterdam. She gave us some insight in the way a city works and what it’s role is. I really liked the metaphors of businesses that Rotterdam could be. The presentation by Auke Ferwerda showed some insight in incubators and the effort to lower risk and a higher success rate. The combination of these speakers, in my opinion, did not make a business case but was interesting.