This week I returned from my holiday and started working again. About 2 months ago I started my training for the Amsterdam Half Marathon and the last two weeks I ran a lot. At the moment my energy levels are great and still growing. This is a wonderful feeling that I van recommend to every one. Now the key is to focus energy on work again and to spare some energy for the last quarter of the year.

This morning I came across this nice blog from the guys from Social Cast on The Future of Work. If you have some time to spare take a look. They have some nice blogposts and infographics on the site. I added a part of this nice infographic on the 8 hour workday. 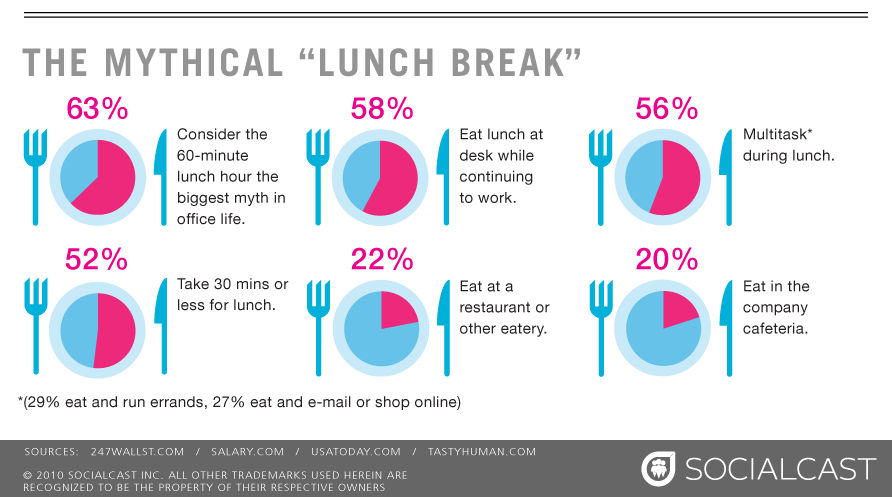 Being the first of the month all business activities are concerned with updating the administration. First was the VLC Advisory administration. This was the first time and we are in a transition of systems. The consequence was that it took a while and needed some manual corrections because of the transition. I had to take some time to get to know the systems and the rationale behind the numbers. On top of that we are sharing some of the financials with the complete Advisory team so I also prepared those numbers. When the accountant verifies it all, these will be shared so everyone can take a look at their performance. We want to be transparant about this and show were we can help each other.

Up to now I was busy with the financials of NZwijn.nl. Making a number of invoices and updating the administration. My wine administration is a lot more simple but it gets the job done. But the most important things is that it enables me to make the smart choices for the future!

In both systems improvements can be made but that is the case for almost all IT systems. For my wine company that is a lot easier and actually only time and Excel are limiting my options here. One thing they both have in common that changes of the systems need some time and the people that are using them have to learn to use the system. At first working with these systems takes much longer than before but after a while it will get much faster. Actually this will be true for all changes within organizations and IT systems.

Credits for the photo is to Chris JL!

I am looking at two very nice vids twitter posted on its blog yesterday. They are illustrating nicely how tweets from japan were posted, replied retweeted! Information has to move to create value. How does your organisation move information?

Productive conflict can be a way to improve ideas, spark innovation, and mitigate risk. But many teams are unwilling or unable to deal with the emotions that conflict often elicits. https://s.hbr.org/36dwk9I